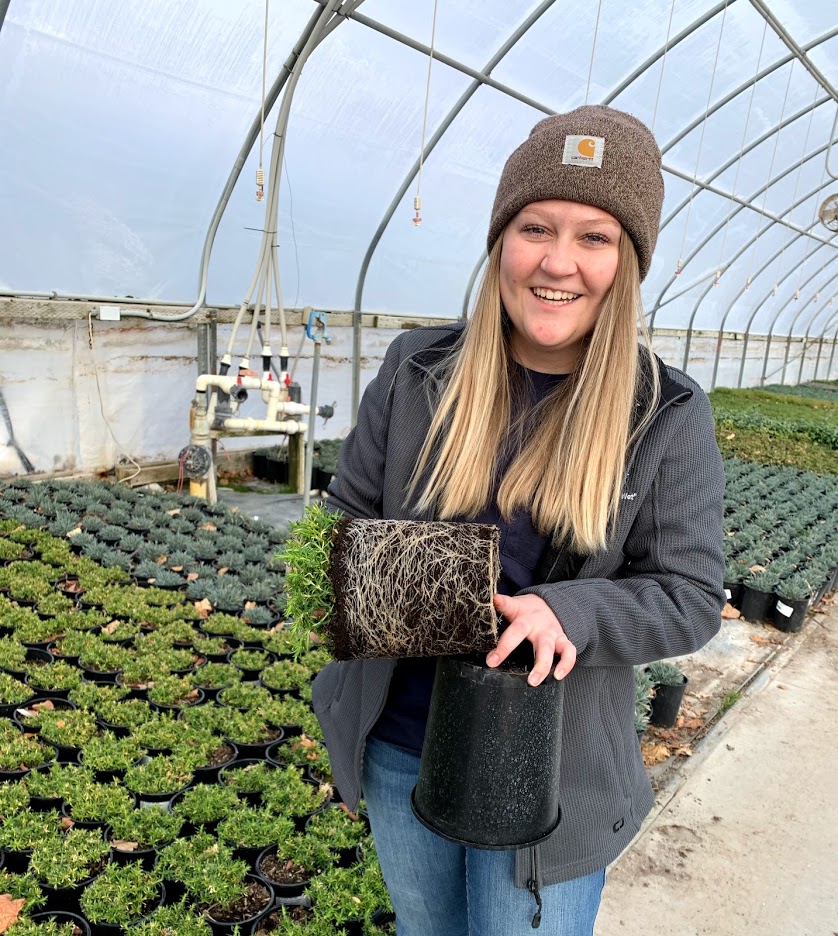 Ellie Garrard didn’t set out to be a horticulturist. When she graduated from Burley High School in 2017, she chose to go to the College of Southern Idaho (CSI) because it was close to home. She was introduced to the idea of horticulture from one of the leaders of her youth group at church who had a degree in horticulture, and Garrard was fascinated with the massive gardens she kept.

“I liked that she could make her own schedule, and she really inspired me to work with plants,” said Garrard.

But it was not the image of perfect gardens that made Garrard decide to pursue a degree in horticulture herself—it was the idea of climbing trees with a chainsaw.

“I’m kind of a small person; I’m just five feet tall,” said Garrard. “But the thought of someone like me being able to climb a tree with a chainsaw like any big, burly man kind of excited me.”

“I was so excited! It made me want to buy climbing equipment and a chainsaw,” she said.

To make sure horticulture was a good fit, Garrard interned for a tree pruning service one summer. She learned how to completely take down trees, install sprinkler systems and lay sod.

“I loved it, but it was really hard on my body,” she said. “In the process, I discovered I was really good at pruning fruit trees, though.”

While Garrard pruned fruit trees for friends and neighbors while she was going to CSI, she had no idea it would eventually play a large role in her career. When Garrard graduated from CSI with an Associate of Applied Science degree in horticulture in the spring of 2019, she moved home for a few months to plot out her next move. Her mother ran into an acquaintance from church who owned Teton Trees. They had an opening for a pesticide applicator that had gone unfilled for months.

“As it turned out, pesticide application was the only class I wasn’t able to take at CSI,” said Garrard. “But the position had been open for several months, and they said they were willing to train me, so I took it.”

At first, Garrard was hesitant because the pest control side of horticulture was so new to her.

“I also didn’t know how much I’d remember from school. I didn’t know the names of all the weeds and leaves or how to determine what kind of bug was causing damage, but I kept at it,” Garrard said.

Her hard work paid off, and Garrard was soon promoted to assistant grower of plant health.

“When I realized I did have the training and knowledge that were needed in a plant health position, those skills—like pruning—really came back,” she said.

“At our smaller location, we only have one or two pruning crews, but in Paul, there are three or four pruning crews, and many of them only speak Spanish,” Garrard said. “I wrote the guide and worked with some translators to ensure all our employees were following the same standards.”

Like the plants she tends, Garrard is thriving in her new role.

“In horticulture, there’s a lot of on-the-job training, and we learn a lot from consultants,” said Brett Bingham, Teton Trees’ general production manager and Garrard’s supervisor. “Ellie has a great attitude, and she caught right on. She helps with soil fertility, plant health and pesticide application. She knows what to look for and communicates with other professionals to get her job done.”

Garrard may not have set out to grow picturesque gardens, but as it turns out, she’s still surrounded by beauty.

“I love my job. I love getting to work with plants and watch them change throughout the year. In the shrub yard in the fall, the color stays pretty for a long time,” said Garrard. “I’m always surrounded by acres and acres of pretty plants.”