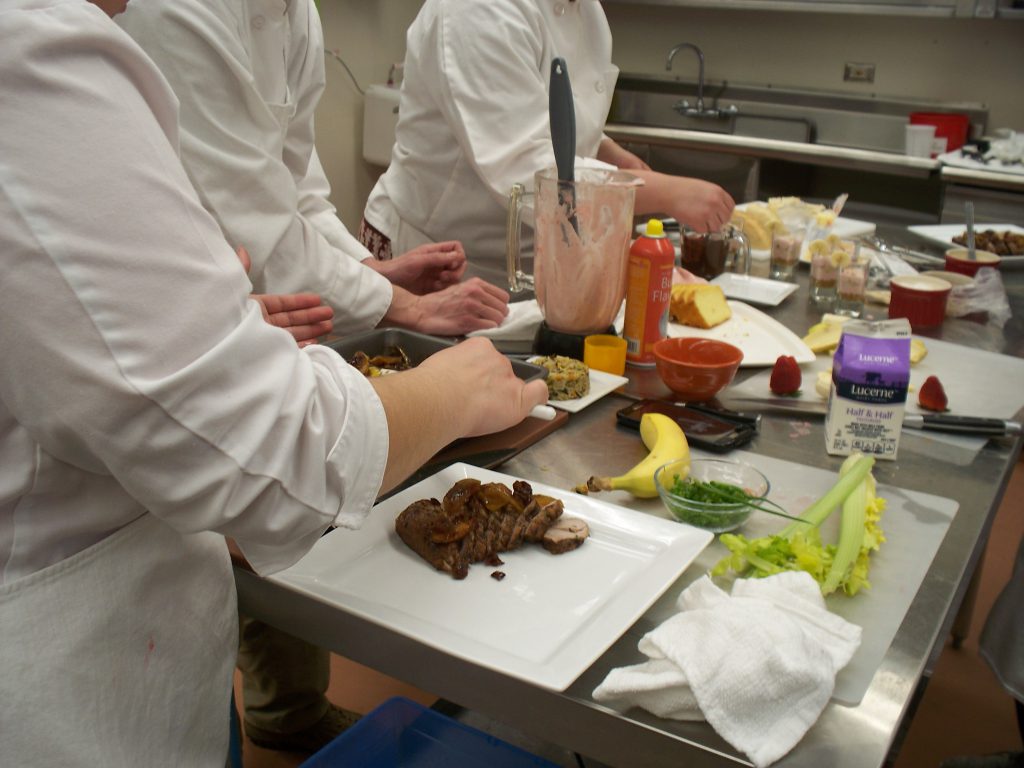 Rodney Farrington didn’t plan to teach hospitality management. But after ending a 28-year relationship with the hospitality corporation that employed him, the non-compete clause in his contract prohibited him from working in the industry he loved for three years.

“I had no idea what I wanted to do next, so my wife suggested I go back to Lewis-Clark State College (LCSC) and get an associate degree in hospitality management,” said Farrington.

After he graduated in 2012, Farrington opened a restaurant in Uniontown, Washington. He was content running his restaurant—until he received a phone call from LCSC asking if he’d fill in as an adjunct professor for the rest of the spring 2016 semester.

“The professor that taught me had quit due to health reasons, leaving two students with no professor to help them complete the program,” said Farrington. “I never in my life thought of myself standing in front of a class imparting my wisdom on the students. I just did it for the experience; I thought it would be nice to have those two classes on my resume, but I ended up absolutely falling in love with the job.”

Five years later, Farrington has taken what his predecessor had on file and added his own twist to it. Initially, he removed the classes he didn’t think were relevant and created a true hands-on connection to industry for each class.

“Once I fell into the world of CTE, I understood how I could connect the industry I’ve been involved with my whole life with helping students get the skills and theory they need to start their own successful careers,” said Farrington. “I only get them for two years. To the best of my ability, I want to create a real-life connection to what they’ll experience in the industry. That’s why I have them complete a project-based learning outcome in each course.”

Examples of Farrington’s hands-on approach to education include planning a trip around the world in Introduction to Hospitality, creating a business plan for a food truck in Hospitality Managerial Accounting, and designing a restaurant from the ground up in Food and Beverage Management.

“That entails designing a menu, understanding the pricing structure, using desktop publishing applications to design the menu, and presenting the concept to ‘investors,’” said Farrington. The “investors” include bankers, investors and financial planners affiliated with the industry who serve on Farrington’s Technical Advisory Committee (TAC).

“Money spent on training and recruiting is one of the largest expenses employers incur,” said Farrington. “The people on my TAC say they would far rather hire someone who has a good understanding of what the job looks like day in and day out and invest in them than train someone from the ground up and risk high turnover rates.”

It was the desire to reduce turnover that brought Farrington to McCall’s Shore Lodge in 2017. Because of the work Farrington did redesigning his classes—and the partnerships and connections he built in the process—he was invited by the Albertson Foundation and the A. L. Scott Foundation to discuss ways to reduce turnover and improve employee retention at the Shore Lodge.

“They lose almost half of their employees when students go back to school in the fall. They came to me looking for a way for student employees to stay on-site while completing their CTE-driven education,” said Farrington.

After hearing the Shore Lodge’s concerns, Farrington developed a program he calls online, on-site industrial education (OIE). Under his model, the employer provides pay, possible packaged amenities like meals and lodging, and any other additional benefits while the students work on-site getting hands-on, industry-driven training, and completing their degrees. Upon graduation, employers can offer tuition reimbursement as a job perk for every year that student stays on. Farrington has one student piloting his OIE concept this semester.

“For each class, we have to identify specific benchmarks with each student and their supervisor to verify what they’ve accomplished and document that they’ve done sufficient work to earn the degree,” said Farrington. “For example, in the Food and Beverage Management, we can connect the theory of inventory control with evidence of inventory control in practice on the job.”

The Shore Lodge is excited about the prospect of using Farrington’s OIE model in practice, and the Sun Valley Resort has expressed an interest in OIE, too. Farrington is excited about what the model can mean for Idaho’s hospitality industry and his students.

“With Idaho being the number one state people are moving to, hospitality and tourism are growing. I truly believe Idaho could be the forerunner in the new, post-coronavirus version of hospitality, travel and tourism education. I want this to become a small, boutique hospitality management program for those up-and-coming celebrities in the field,” said Farrington.